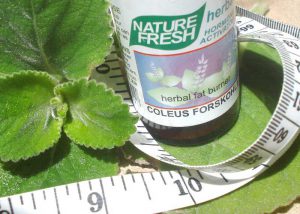 Forskolin is the pharmacologically active compound found in Coleus Forskohlii which has been used in over 5000 research studies since 1974.

The enzyme adenylate cyclase is activated by forskolin. This regulates the formation of cAMP (cyclic adenosine monophosphate) a compound that in turn exerts control over numerous activities in every cell. Raised cAMP promotes the inhibition of mast cell degranulation and histamine release, inhibition of platelet activation and degranulation, increased force of contraction of heart muscle, relaxation of the arteries and other smooth muscles, increased insulin secretion, increased thyroid function, and increased lipolysis (fat breakdown). It appears to exhibit potent immune system enhancement by activating macrophages & lymphocytes.

Coleus (Forskolin) helps to treat: hypertension, mild congestive heart failure, asthma, eczema and psoriasis, digestive weakness and IBS, persistent urinary infections, is anti-inflammatory, antihistamine and soothing to the nervous system. It is vital to communication between hormones and neurotransmitters to treat symptoms of low oestrogen or testosterone, dopamine and catecholamine activity. Coleus is effective for weight loss and fat burning with prevention of subsequent fat storage. Also aids digestion and stimulates thyroid function to speed up metabolism. Helps release stored glycogen from the liver to balance low blood sugar. Aids in sugar metabolism for treatment of insulin resistance – syndrome X (diabetes 2,) PCOS (polycystic ovarian syndrome) and obesity.Forskolin has been shown to be safe and effective and has a great potential as a sports supplement.

Coleus has many fat loss mechanisms and helps to balance cortisol and blood sugar: Forskolin in Coleus stimulates signaling agents within adipose tissue, leading to the breakdown of triglycerides and the subsequent release of fatty acids and glycerol into the bloodstream. During endurance exercise, these fatty acids are extracted from the bloodstream and burned as a fuel to provide ATP energy to the exercising muscle. In turn, fat cells shrink in size, helping overweight patients reduce their body fat more efficiently. Many of these people have a resistance to burning fat caused by higher serum insulin levels and insulin resistance (syndrome X), which tends to lock fatty acids and triglycerides in fat cells, reducing the fat-burning ability.

Coleus stimulates digestive enzymes: improving digestion and food assimilation and increases nutrient absorption in the small intestine. It increases thyroid hormone production as well as stimulates thyroid hormone release. Increasing the thyroid activity (comparable in strength to thyrotropin or TSH2) results in an increase in metabolism. An increase in cyclic AMP leads to subsequent activation of protein kinase that activates the hormone sensitive lipase which is involved in the breakdown of triglycerides, known as building blocks of fatty tissue. This is a thermogenic effect. It also helps release stored glycogen from the liver to balance low blood sugar. Insulin is important for carbohydrate metabolism but it is also involved in the metabolism of fats and proteins in controlling weight.

Safe, no side effects and many other benefits. Coleus does not cause tachycardia; “sudden-death” heart attack; stroke; nervousness; anxiety; insomnia; seizures; or other serious adverse side-effects associated with the use of ephedra (Ma Huang). Coleus forskohlii does not stimulate the central nervous system. It has no long-term side effects.

Congestive Heart Failure. Increased levels of cAMP increase the ability of the heart muscle to produce ATP (adenosine triphosphate), the energy required for heart-muscle contraction and its optimal force with each beat (increased stroke volume). Forskolin also relaxes the artery wall, decreasing blood pressure and preload stress on the heart muscle. All of these effects appear to be mediated via increased cAMP synthesis, which acts as a secondary messenger on various cellular processes.

Hypertension: forskolin relaxes blood vessel smooth muscles via increased cAMP synthesis, helping to reduce high blood pressure by reducing resistance to blood flow. Forskolin antagonizes the action of platelet-activating factor (PAF) by interfering with the binding of PAF to receptor sites on cells. In turn, this reduces platelet stickiness and smooth muscle contraction of blood vessels and bronchiole air passageways. Again, these effects are mediated through increased synthesis of cAMP. A preliminary trial found that coleus reduced blood pressure and improved heart function in people with cardiomyopathy. Coleus also increases cerebral blood flow, indicating that it may be beneficial in cerebral vascular insufficiency, and in enhancing post-stroke recovery.

Asthma manifests as a relative decrease in cAMP in the skin and bronchial smooth muscles. Most modern drugs for allergic symptoms are designed to increase cAMP levels. Coleus Forskohlii achieves this through improving enzyme activity without negative side effects. Coleus is an effective smooth muscle relaxer, resulting in bronchodilation, decreased airway resistance, increased vital capacity and increased forced expiratory volume. This action is the result of the increase in Cyclic AMP caused by coleus. Methylxanthine-containing drugs inhibit phosphodiesterase enzyme, which breaks down cAMP.

Psoriasis: Low levels of cAMP appear to disrupt its balance with cGMP (cyclic guanine monophosphate). This imbalance has been shown to cause rapid cellular proliferation (a rate that is 1,000 times faster than normal cells), which is a main feature of the psoriatic condition. In experimental studies, coleus forskohlii has been shown to slow the proliferation rate of skin cells by improving the relative balance of cAMP to cGMP. Topical application of Nature Fresh Bee Balm has proved to be very effective in removal of scales and restoring normal skin. Supplement with omega 3 oils, follow the blood type diet and avoid foods containing arachidonic acid eg: fatty meat, peanuts, coconut & dairy fat. Also avoid excessive omega 6 oils found in sunflower, corn and cottonseed oil. Only use olive oil.

Depression associated with an imbalance of the neurotransmitters serotonin and dopamine. Recent study sows that increasing Cyclic AMP elevates the catecholamines (neurotransmitters: epinephrine, norepinephrine). Since forskolin elevates Cyclic AMP, it may improve neurotransmitter function and thereby help to relieve depression. Nature Fresh MEGAMAX helps to raise dopamine and testosterone levels associated with male depression. Parkinson’s disease is also a disturbance of these neurotransmitters and the use of Coleus and MEGAMAX is proving to be very helpful when combined with vitamin B6 and omega 3 oil supplements. When combined with disciplined eating and a structured exercise regimen, patients can reduce their dependence on medications that have unpleasant effects.

Male and female “menopause” responds to coleus. Although testosterone levels diminish with age, some men with normal levels may also experience symptoms of low testosterone. This is because the testosterone present may be in a bound form that renders it inactive or there is a problem with the hormone communicating with its receptors. Raising levels of cyclic AMP (adenosine monophosphate) by introducing forskolin from a COLEUS supplement is certainly beneficial in this respect. It may be all that is needed to restore a man’s former prowess. It is far safer than reaching for aphrodisiacs or sexual one-off’s that may interfere with high blood pressure, blood sugar, heart medications, etc.

What are the symptoms of low testosterone in older men?

Tiredness, irritability, lowered libido, aching joints, dry skin, insomnia, excessive sweating, hot flushes and depression. It is no coincidence that these symptoms overlap with a lack of cyclic AMP! Many older women have similar complaints and call it menopause. Is this the whole story? Instead of reaching for HRT, coleus would be a far safer choice to restore communication with estrogen and testosterone receptors. With males a testosterone (and cAMP) deficiency in the long-term causes: bone density to decrease, a loss of muscle tone, sperm counts to drop and erectile failure occurs more frequently. Females with low testosterone also experience a lack of sexual arousal and can’t perform. It is not always oestrogen supplementation that hot-flushing women need. Overdoing the oestrogen to ward off a so-called lack of it results in undesirable side effects such as weight gain, sore swollen breasts and a stand-offish attitude to both men and sex. Just a few drops of Coleus tincture every day can change all that!

What other products can help older men and women with these problems?

1 Zinc prevents testosterone from converting (aromatising) to oestrogen. Take 15 – 30 mg of zinc per day. (Nature Fresh MEGASLIM includes 15mg of zinc and 200mg of coleus per capsule). Although some foods are rich in zinc, we don’t eat nearly enough oysters or pumpkin seeds every day to keep oestrogen and DHT (dihydrotestosterone) at bay.

2 Omega 3 oil is very important to enhance the effects of cyclic AMP. Eat plenty of oily fish from the cold seas, but take a fish oil supplement like salmon or cod liver oil capsules every day.

3 To boost the release and formation of testosterone, take the Nature Fresh Tribulus Terrestris tincture or the MEGAMAX capsules. They help to control testosterone pathways and release dopamine. Good for ladies and men.

5 Nature Fresh Calcium Complex: a very important part of maintaining general health and wellbeing and to look after bones and joints at all ages. Magnesium is vital to cyclic AMP activity. (See Calcium notes).

Special note: This information is not intended as medical advice. Please consult your health practitioner first if you are: pregnant, breastfeeding or epileptic or if you have a serious health condition. You are responsible for your own health and safety.