By Health Researcher Sue Visser . May 2012

In 2002 my husband Jim and I were backpacking in the Far East. Our aim was to see as much of China as we could within our time allowance of a few weeks. As a researcher, I was keen to meet Chinese practitioners and get to know more about their traditional use of herbal medicine. As an opener, I thought of introducing doctors at a research institute in Guilin to some of our tried and trusty African species. The sample of our olive leaf tablets in my rucksack saved the day in a different way!

Our first stop was Thailand. The rainy season was well under way and we thought nothing of the mosquitoes buzzing around. We slept under nets and slicked and sprayed on all manner of mosquito repellents. I had had a very bad experience with conventional antimalarial drugs in India and refused to take them again. The nausea, constipation, and feeling wretched was not worth it. Anyway, mozzies prefer the taste of my husband.

We spent Christmas day in Malaysia, feasting on coconuts on some remote islands. There were no shops around the corner and the hotel kitchen was closed for the day. We roamed around the island, enjoying the diving and the pristine beaches. Nobody warns you that mosquitoes love to nip at your ankles when you wade through the jungle. They bite through socks and seem to love Tabard, Deet; you name it! And don’t rely on nets! Jim was covered in mosquito bites.

We reached China a few days later and set off to Huang Shan, the remote yellow mountain area, after a quick visit to Shanghai and all the buzz and bustle. We signed in for the 3 day mountain trip, spending a night at the hotel at the top of the towering peaks. All day long we had climbed up and up the granite steps that seemed to vanish into the clouds. By sunset we reached the hotel and were served a sumptuous dinner.

But it was not indigestion that woke me up that night. Even without central heating, the bed was like a furnace. Hot flushes? Nope. Hot husband! Jim had a dangerously high temperature, despite feeling cold at times and shivering. By the time the sun slid over the icy horizon he was still cooking and strange sentences were tumbling out of his mouth. I listened out for the names of possible lovers, but decided it was closer to delirium. What now. Phone a doctor?

Olive leaf tablets! I had no choice. According to research, they kill the plasmodium that is responsible for malaria. I put our olive leaf tablets through their paces. Jim took two of them every two hours. By the end of the day his temperature returned to normal and he felt a lot better. The next day we climbed down again, taking it slowly, but we had no other option. It would have taken a doctor just as long to visit us, and we had no cell phones in those days, over ten years ago.

When we mentioned the word “malaria” at the Guilin research institute, they panicked, but could find nothing wrong with Jim. All was lost in translation as we showed them the African, Wild Harvested, Indigenous Species of Olive Leaves. “Aah, solly, we doan wan waste your time.” The doctor did not believe our story. He apologised and disappeared down a long corridor that smelled of disinfectant.

When we returned home, Jim had a recurrence of malaria and again, we reached for the olive leaf tablets that were now thankfully in abundance. The SCIO apparatus confirmed that he had had malaria. For over ten years, these olive leaf tablets have been used both to prevent as well as treat malaria. Our Parasite Remedy also contains olive leaves, with Artemisia and other antimicrobial herbs. We now take this with us as it also helps to prevent and treat all manner of foreign parasites! 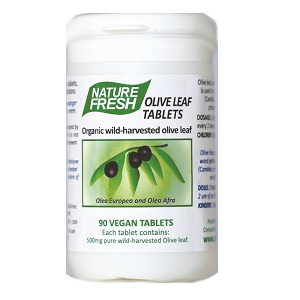